A growing number of employers across the country, including one recently in Springfield, are offering paid family leave as an extra benefit to employees.

While the majority of private industry workers receive paid vacation leave, at 77 percent, and paid sick leave, 70 percent, only 15 percent of employees are offered paid family leave, according to the Bureau of Labor Statistic’s 2017 National Compensation Survey.

That number is slowly rising. In 2010, only 11 percent of workers had access to paid family leave.

Mercy, which now offers paid family leave, is among employers seeking to improve that trend. 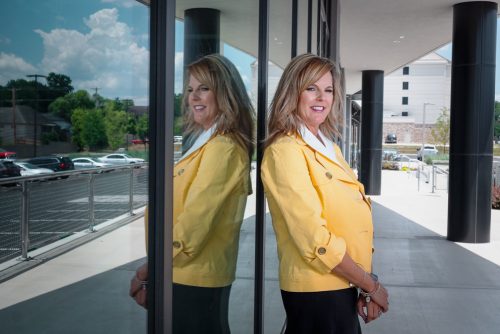 OUT IN FRONT: Lynette Weatherford says more clients of HR Advantage are talking about paid family leave as an employee benefit and a recruitment boost.

Lynette Weatherford, president of HR Advantage Inc., said she’s seen momentum among local employers adding the benefit in the last year. Four HR Advantage clients currently offer paid family leave, she said, three of which had their policies drafted in the past 12 months.

“Employers who have adopted a paid family or parental leave policy see this as a value to their employees to enable them to take time off without there being a financial burden on themselves and their family,” she said, adding the leave is an “attractive benefit offering for recruitment and retention of talent, and to increase employee satisfaction.”

Paid family leave, as defined by the BLS, is granted to an employee to care for a family member, including a newborn, adopted child or a sick relative.

Most employees are eligible for unpaid family leave through the Family and Medical Leave Act, which guarantees job security for up to 12 weeks of absence, but full or partial pay in those instances is more rare. It’s not required in most states.

Even in states where this benefit is not required, some employers could see a tax benefit through a change to the IRS’ tax code section 45S. The change to the tax code this year provides a benefit to employers who offer at least partially paid leave to its employees after the birth or adoption or foster care placement of a child, or after a serious illness of the employee’s relative.

Weatherford said most policies she’s helped to craft for local businesses offer between two to six weeks of partial to full pay.

“Our firm has helped several employers within the region, Missouri, Arkansas, Kansas and Oklahoma, who have chosen to adopt their own paid parental leave policies despite not being required to do so,” she said.

For its roughly 44,000 employees systemwide, Mercy announced last month it’s offering two weeks of paid leave to mothers and fathers after the birth, adoption or foster placement of a child. This benefit is in addition to paid vacation and sick time.

Laura Starks, vice president of human resources at Mercy Hospital Springfield, said the change came after a benefits and services survey revealed paid family leave was a top priority for the nearly 8,000 co-workers who participated.

“It’s important for us to be proactive in understanding what our co-workers need to support our family and provide that work-life balance,” she said. “It was just a natural next step for us.”

Starks estimated it would cost the local hospital $650,000 annually to offer the benefit. Officials anticipate a minimum of 350 employees using the service in the coming year, as that was approximately how many Mercy Hospital Springfield employees gave birth in 2017.

Starks added the benefit provides “dignity” to co-workers and is an important offering in recruitment.

Referring to new hires, she said, “That’s something they’re considering: How will they be supported at work?”

Among the top five companies on Springfield Business Journal’s 2018 largest employers list, Mercy was the only one to offer full pay for maternity leave and for spouses and partners, based on recent inquiries of company spokespersons. The others offered the federally mandated FMLA and short-term disability leave.

CoxHealth, the area’s largest employer, has developed its own short-term disability plan to cover maternity leave, offering partial pay to employees, according to spokeswoman Kaitlyn McConnell.

The hospital also offers similar leave to employees who are adopting or fostering a child.

Benefit trends
But this isn’t the only voluntary benefit employers are adding for recruitment and retention.

“Especially on the coasts, pet insurance is becoming bigger and bigger,” he said. “People love their animals, and it costs a lot of money to take them to the vet and do a procedure on them and keep them well.”

“(Employers) are just trying to do everything they can to get and keep good people,” he said. “The unemployment is so low. Now it’s a fight to keep people from being stolen from your competitor.”

Weatherford said she’s also seen the trend in pet insurance and wellness, adding that some employers also offer charitable giving matches and student loan repayment benefits. She said employers are thinking outside of the box and looking at nontraditional benefits employees will find valuable.

Legislative efforts
But some lawmakers and activist groups do not consider paid family leave as simply an auxiliary benefit.

Following that move, now nearly all state employees are eligible to take paid time off following the birth or adoption of a child.

Some lawmakers hope to pass on those same benefits to private industry employees.

Rep. Tracy McCreery, D-St. Louis, introduced a bill to establish the Missouri Earned Family and Medical Leave Act, which would provide up to “six weeks of wage replacement benefits per year to an employee who takes time off for family or medical leave.” House Bill 1956 was introduced in January and sent to be reviewed by the House of Representatives’ General Laws Committee.

Weatherford said she doesn’t expect a law requiring such benefits for private employers to pass in Missouri anytime soon, but she said employers should watch the market as paid family leave grows in popularity.

“As more companies voluntarily offer some form of a paid leave benefit, employers will want to seriously consider what they may need to do to remain competitive in their respective markets and to become or remain employers of choice in our state,” she said.